I started this blog primarily for my church members, giving some extra “points to ponder” from the previous Sunday’s message. My commitment to a weekly post has waned somewhat due to other responsibilities, but I’m sure I’ll get back to some normality and better use my time (I hope).

When setting up this blog in January of 2012, there were several immediate decisions – style, widgets and headers. I wanted the header picture to represent rural Iowa and not someone else’s stock photo. The photo that came to mind was taken on July 5, 2011, as we returned to Creston after celebrating the Fourth with our kids in Arkansas. About eleven miles east of Creston, we saw a beautiful sunset and found a little gravel road on which to turn and take a few pictures. The sunset pictures were not outstanding, but the Redwood Avenue picture with its dip and rise through the rolling hills of southern Iowa caught my attention. It captured the simple beauty of rural Iowa and a sense of the journey on which we find ourselves as Christian sojourners – with ups and downs in this life, but ultimately upward!

As the seasons began to change, I thought there was a need for a change in header, as well. While missing the opportunity to take a Spring picture in 2012, I remembered to get out in the Fall and capture this picture:

I almost let the Winter of 2012-13 slip away before I got the required snow-covered picture (little did I know that we would have snow on May 2).

The final piece of the four seasons of Redwood Avenue came a few weeks ago. While hoping to have a setting sun as in the other picture, I settled for an overcast evening to get this final shot:

After almost 19 years in Iowa, my appreciation for the unique character of the four seasons never diminishes. The cycle of life that God has programmed into His creation – from the sprouting forth of new life in Spring to the seeming cessation of life that comes in Winter – bring special blessings in every stage. Each season brings it own hardships and joys, much as every season of life.

As we go through each season of the year and life, we run the risk falling into one of two traps: focusing on the difficulties of the current season or longing for the joys of the next. In doing so, we fail to appreciate the unique benefits or growth opportunities found in the present moment. For instance, while I can be extremely weary of still shoveling snow in April, there is an incredible sense of wonder when you take the time to appreciate the quietness of snowfall, to look at the unique pattern of an individual snowflake or to see the unusual shapes of snow drifts. 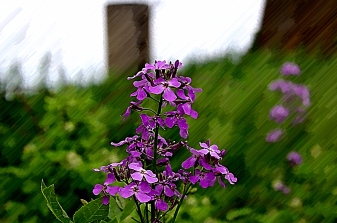 While each season of life has its difficulties and disappointments, there is truth in the saying that “God never wastes a hurt.” It is important that we look for God’s grace (power) in that trial or hardship, which will in turn equip us to share that grace with a “fellow struggler” in the future.

3 Praise the God and Father of our Lord Jesus Christ, the Father of mercies and the God of all comfort. 4 He comforts us in all our affliction, so that we may be able to comfort those who are in any kind of affliction, through the comfort we ourselves receive from God. (2 Corinthians 1:3-4, HCSB)

Whether you find yourself as a single adult, wanting to be married, or a senior adult, struggling with the effects of old age, there is something in your current “season of life” to embrace that is exquisite and edifying. May we learn to live with the type of contentment the Apostle Paul expressed: “In any and all circumstances I have learned the secret of being content” (Philippians 4:12, HCSB).

What are some of the “happenings” in your stage of life that you have embraced for the good that God may have for you and others, even though it could be viewed by some as a hardship?

God often gives a verse from His Word that can be especially helpful during some of the difficult seasons of life. What is that verse for you and how did God use it?