Cheri Lucas Rolands writes: For this week’s challenge, share a photo with letters…a snapshot of how we communicate with one another, even if we don’t speak the same language. For anyone who has been around trains in the U.S. for the last 40 years, graffiti is an expected appearance on freight cars. My town has a switching yard and examples of this spray painted lettering can be seen with some frequency. As I passed the yard Saturday evening, I found this example of a gondola car with the words “SUNDER DRONE” painted prominently on the side. 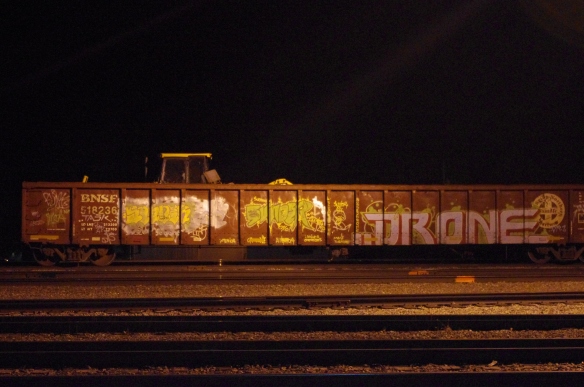 Joe, a member of my church, is the retired trainmaster of the Burlington Northern Santa Fe Railroad switching yard in Creston. He told me that he remembered seeing graffiti on train cars when he began working in the late 60’s. Most sources show that the availability of aerosol spray paint, reaching a production of 270 million cans annually by 1973, aided in the explosion of graffiti art. With its portability and fast drying quality, graffiti artists could quickly attack their sidetracked canvasses with multiple colors of paint cans. 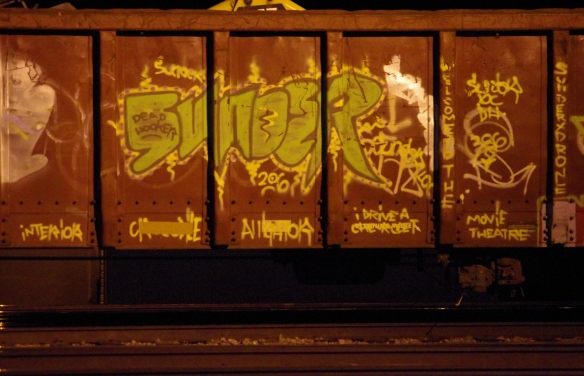 Sunder – “I drive a Chevrolet.”

However, some of the earliest graffiti artists were hobos and rail employees. Hobos, who traveled by hitching rides on freight cars would leave symbols, a secret language, to guide fellow travelers. Their messages would warn of dangerous situations, as well as giving directions for food, water and work.

Trainmen were also responsible for some “tagging.” Joe told me of two well-known “artists.” A switchman, Herbert A. Meyer, in St. Louis, Missouri, is credited with the drawing of a man with a sombrero, enjoying a siesta under a palm tree. The name “Herby” was always followed by the date of the drawing. Another trainman known for his graffiti art was engineer, Smokin’ Joe. His locomotive drawings on boxcars featured his name “Joe” and the current number of drawings within the trailing smoke. His graffiti appeared on over 20,000 railcars.

Whatever the origins of graffiti art, it has become part of our cultural landscape.