I was mowing around a tree in early June when I noticed a plethora of insect skins around the tree’s base. The arrival of the 17-Year Cicada (Brood III) had been announced by the media, but I was not expecting it in my backyard. 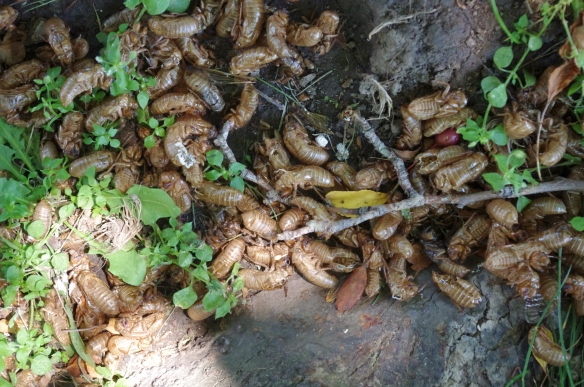 As I looked up the trunk of the tree, the tiny, empty casings of the morphing nymphs covered the branches and leaves as the winged cicadas had shed their skins for their short adult life.

Though I did not witness the cicadas’ emergence (nor manage to photograph a live one), each decaying skin had the same hatched opening like a two-sided convertible top being retracted for their release.

There were often thread-like ribs that appeared to have been stretched from the exoskeleton as the cicadas came out.

With so many cicadas winging their way into my neighborhood, I expected a cacophony of buzzing. Surprisingly, they must flown to other areas since I would only hear an occasional “love call” in the afternoons…not that I missed it.  The decibel levels (up to 120 dB) produced by a male are the loudest of all insects and have been known to create permanent hearing loss when  in direct proximity to the human ear.

The adult cicada’s short life-span now complete with mating and the laying of eggs in slits made by the female in deciduous tree leaves, the eggs hatch after 6-7 weeks. Then, the nymphs fall to the ground, burrowing two feet down to start the 17-year cycle all over again.

For more examples of this week’s photo challenge of “containers,” click HERE. Additionally, HERE is a link to the local newspaper’s reporting of this “buzz.”