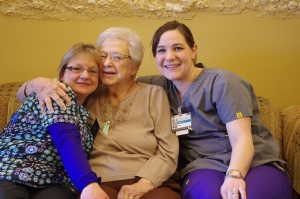 Saying goodbye to two of the hospice nursing team members as she “graduated” in March.

I sit in a hospice family room this afternoon, hearing the raspy breathing of my mother in the other room. We’ve already been through this once when back in January she was placed in hospice for palliative care because of uncontrollable seizure activity. After a two month stay, she improved enough to “graduate” to assisted living.

In one way this was a step-down from her earlier independent living, but it was two steps-up from hospice. She adjusted well, but the seizure activity began again, resulting in a nursing home placement for 10 days. She showed some improvement with rehab but with another round of seizure episodes, she was ready to return to hospice for tender loving care, almost exactly three months from her previous discharge.

We were grateful for those three months. It allowed us to celebrate her 95th birthday (see Celebrating the Gift of Our Matriarch); she made new friends and caught up with a few old ones, who had moved from her retirement apartment to assisted living; and, she got to meet her newest great-grandchildren, my daughter’s twins. Additionally, she continued to serve the Lord through her witness of faith in church and community. I am on a rotation of ministers who go to the nursing homes, and though I usually accompany myself on the guitar when we sing hymns, she played the organ for me at assisted living while she was a resident. It was nice to have her play for me one last time.

Mom was a music teacher. A graduate of Grinnell College in Iowa, her first teaching assignment was in Seymour Iowa, where she taught music. It was there she met my dad, who taught business classes in the high school. He joined the Navy in 1943, and they were soon married. She never taught school after that, having begun to raise a family of five, four daughters and a son. However, her music training was not wasted as she sang in church choirs and ensembles and played piano and organ in a several churches.

Additionally, she supplemented the family income by giving private piano and voice lessons in our home for a number of years. Almost every day, I came home from elementary school to hear the sound of inexperienced pianists playing their scales and struggling through simple songs.

Her playing and singing, however, were exceptional. I remember lying under the baby grand piano while she played, watching the action of the pedal as it moved the dampers up and down and letting the melodies cascade down from the sound board onto my ears. There were other times when I listened from my room to her rehearsals with my sisters, who formed a gospel quartet and occasionally sang at the local V.A. hospital chapel services on Sunday mornings. She even accompanied me as a child, though never for public consumption as I recall. My earliest recollection was at age 5, singing the chorus of the ragtime love song, “O, You Beautiful Doll”:

I’m sure I would have been a YouTube sensation if it had been around in 1961. 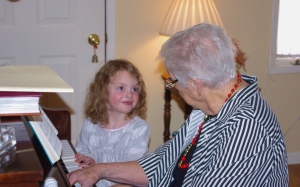 As my voice matured, she encouraged me to sing a few songs at church with her as my accompanist. One of those songs was on my mind as I awoke this morning after spending the night close to her bed at the hospice house – “Ivory Palaces.” Before singing it with her

I had never heard the song, but it became a favorite. The writer, Henry Barraclough, wrote this song after hearing a sermon on Psalm 45, a royal wedding song with a secondary application to the Messiah. As with most hymns, there is a progression – a story told. The song speaks of the glorious nature of Christ, but acknowledges the suffering He bore on the cross because of humanity’s sin. However, the new life in Christ brings salvation from sin’s bondage and leads to an everlasting presence before the Jesus Christ the Lord. The last stanza speaks of that ultimate hope and reward for the believer. These are the words to which I awoke and hope for my mother’s imminent awareness:

In garments glorious He will come,
To open wide the door;
And I shall enter my heav’nly home,
To dwell forevermore.
Out of the ivory palaces, Into a world of woe,
Only His great eternal love Made my Savior go.

And so life goes. We prepare for the death of our “great big beautiful doll” of a mother, for whom our hearts will ache when she leaves. However, we know that we will sing together with her again as we look forward to the fulfillment of our hope in Christ Jesus and His promise of eternal life.

2 Dear friends, we are God’s children now, and what we will be has not yet been revealed. We know that when He appears, we will be like Him because we will see Him as He is. 3 And everyone who has this hope in Him purifies himself just as He is pure.

26 thoughts on “Preparing to See the “Ivory Palaces””