Living in rural Iowa for the last twenty years, I’ve seen a lot of wild life, but it’s only been in the last three years that there has been a growing presence of bald eagles. While I have been able to capture a few at a distance, I am often traveling through the a local state park to “see what I can see.” Last week, I saw a large bird, flying solo among all the flocking Canadian geese, who winter at the lake. It wasn’t an eagle but a beautiful red-tail hawk. 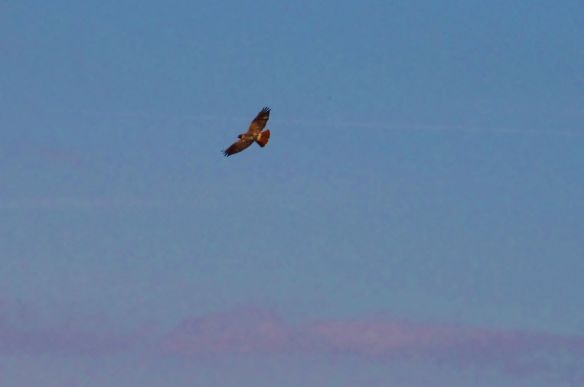 Later, I found another hawk roosting in the deserted campground. However, it would fly to another tree every time I approached for a clear shot. Finally yesterday afternoon, I saw it flying toward the camp ground. As I slowly drove into the area, there it was, roosting 40 feet up in a tree no more than 20 feet from the road. I eased the car as close as I could and stepped out on the far side to allow me to stay obscured. Much to my delight, the hawk gave me the “reward” of a three-minute “drive-by” photo shoot.

Here are a few of my distant captures of mature and juvenile eagles feasting on some geese carcasses on a local lake.

You can find some more examples of “reward” HERE.